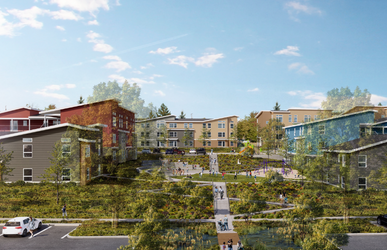 The Everett Housing Authority’s redevelopment plan for former Baker Heights public housing  was featured in the Everett Herald October 20, 2022. The article covered EHA’s presentation from the October 4th Planning Commission meeting, which proposed 1,500 housing units and 45,000 square feet of civic and commercial space. The mixed-income development will be between Pine and Poplar Streets, and 12th and 15th streets in the Delta Neighborhood.

The redevelopment, called the Park District, will be completed across several phases over the next 10 years. Construction for the first phase aims to start in 2024. Buildings include one- to three-bedroom units, live-and-work units, and townhomes. The civic and commercial space aims to include such use types as a grocery store, restaurant, barbershop, library, childcare, and an early learning center.

From the article: “The land is in one of the city’s historically poorest neighborhoods. Everett Housing Authority leaders hope making some of the units market-rate instead of subsidized can ‘decentralize’ poverty from the Delta neighborhood.”

EHA’s Executive Director, Ashley Lommers-Johnson, shared, “Everett Housing Authority turns 80 this month. Eighty years from today, people will look back and see a community where families have thrived and where a history of racial inequity in housing has been erased.”

Image: A rendering of part of the Park District, Madrona Square.